Alieva has won prizes in Operalia and in the Francesco Viñas and Maria Callas competitions. Her recordings include a disc of Italian opera arias (Pace mio Dio) for Delos Records, a disc of Russian arias and songs for Naxos and a disc of great Italian love duets with tenor Aleksandrs Antonenko. Her concert appearances include Verdi’s Requiem in Moscow and at the Linz Brucknerhaus, gala performances in Lithuania and France and Beethoven’s Missa Solemnis in Moscow. 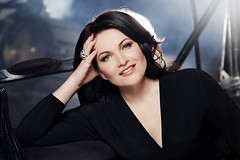