British designer Dick Bird made his Royal Opera debut in 2012 on the world premiere production of The Firework-Maker’s Daughter, co-commissioned by ROH2 and The Opera Group and directed by John Fulljames. He has since designed La donna del lago for The Royal Opera, also directed by Fulljames.

Bird has worked as a designer for opera, dance and theatre since 1998. Opera credits include Les Pêcheurs de perles for the Metropolitan Opera, New York, From the House of the Dead for Opera North, Béatrice et Bénédict and Der Freischütz for Opéra-Comique, Das Portrait for Bregenz Festival, The Pearl Fishers for English National Opera, Snegurochka for Wexford Festival, Eugene Onegin in Vilnius, The Gambler for Opera Zuid, Nabucco for Opéra national de Lorraine à Nancy and Street Scene and The Enchanted Pig for The Opera Group (now Mahogany Opera Group). His ballet designs include The Firebird for National Ballet of Japan, Aladdin for Birmingham Royal Ballet, The Nutcracker for Star Dancers Tokyo, La Bayadère for K-Ballet, Tokyo, and The Canterville Ghost for English National Ballet.

Bird’s theatre work includes Hamlet and La Grande Magie for Comédie-Française, La Comédie des erreurs for Théâtre Vidy, Twelfth Night and The Tempest for Teatr Polski, Light for Complicité, Edward Bond’s Lear for Sheffield Crucible, A Prayer for Owen Meany and The Night Season for the National Theatre, Harvest for the Royal Court and Othello and As You Like It for Shakespeare’s Globe. 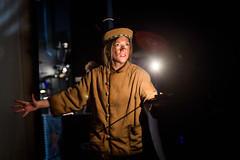 Our quick introduction to this family opera inspired by Philip Pullman’s captivating fairytale.