American dancer Deirdre Chapman is a former First Soloist of The Royal Ballet. She joined the Company in 2002 as a First Artist and was promoted to Soloist within three months of joining, and to First Soloist in 2003. She retired from the Company in 2014 and has since returned as assistant choreographer, working with Kim Brandstrup on Ceremony of Innocence and Hofesh Shechter on Untouchable.

Chapman was born in Minneapolis and began dancing at her mother’s dance school. She trained in both ballet and contemporary at Minnesota Dance Theatre, Ballet Arts Minnesota and the San Francisco Ballet School. Chapman joined San Francisco Ballet in 1992 after graduating from high school and was promoted to soloist in 1997. The next year she moved to London and joined the then Rambert Dance Company, where she spent four years before moving to The Royal Ballet. Her repertory included roles in Jiří Kylián’s Symphony of Psalms, Ohad Naharin’s Axioma 7, Christopher Bruce’s Ghost Dances and Rooster and in works by Val Canaparoli, Merce Cunningham, William Forsythe, Agnes de Mille, Mark Morris, Jerome Robbins, Paul Taylor, Glen Tetley, Twyla Tharp and Helgi Tómasson. 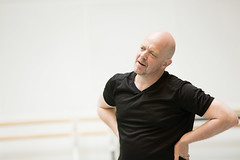 Deirdre Chapman and Bennet Gartside in Ceremony of Innocence, The Royal Ballet

Deidre Chapman and members of the corps de ballet in Giselle, The Royal Ballet

Deirdre Chapman in The Sleeping Beauty, The Royal Ballet