English dancer and teacher David Pickering is a teacher and Learning and Participation Creative Associate (Ballet) and a former Soloist of the Company. He trained at The Royal Ballet School and joined the Company in 1990, promoted to First Artist in 1994 and Soloist in 1999. He was appointed Education Administrator in 2008 and in 2013 completed a course in Ballet Education Practice at the Royal Opera House. He retired from dancing in 2014 when the position of Learning and Participation Creative Associate (Ballet) was created for him.

Pickering was born in Barnsley and brought up in Leeds. He trained at the Jean Pearce School, Ratcliffe Academy and The Royal Ballet School. His repertory with the Company included Von Rothbart and Benno (Swan Lake), Paris and Tybalt (Romeo and Juliet), Rakitin (A Month in the Country), Gentleman with the Rope (The Rake’s Progress), High Brahmin (La Bayadère), Count Hoyos and Prince Philipp (Mayerling), Andres and Captain (Different Drummer) and Lead Couple (La Valse) as well as roles in ballets across the Royal Ballet repertory. He created roles in All Nighter, Horseplay, The Judas Tree, Winter Dreams, Masquerade and There Where She Loves.

As Creative Associate for the Company Pickering is involved with outreach projects organized by the Learning and Participation department at the Royal Opera House, including Chance to Dance, Create and Dance, Ballet Dots, Monday Moves, Dance with The Royal Ballet, Everybody Dance and Ballet Studio Live. He co-creates and delivers bespoke Learning and Participation programmes that support The Royal Ballet’s international tours throughout the world, offering inclusive workshops, teacher training and access to Royal Ballet dancers and their performances for community groups of all ages, abilities, disabilities and socio-economic circumstances. He has worked with groups that have survived climatic disasters such as earthquakes in Kumamoto Japan and the Sichuan province of China as well as students in favelas in Rio de Janeiro. Pickering was part of a team from The Royal Ballet involved with an episode of ITV’s ‘What Would Be Your Miracle’, helping a young girl who suffers from cerebral palsy achieve her dream of dancing. He was made an MBE in 2018 for his Services to the Arts and Education. 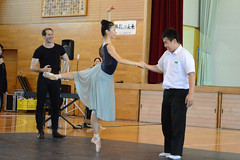 Children in Kumamoto, many of whom have been unable to attend school recently, attended a workshop focused around Giselle.

Laura Morera and David Pickering in Tales of Beatrix Potter

Itziar Mendizabal as the Queen of Hearts and Camille Bracher, Thomas Whitehead, Jonathan Howells and David Pickering as Playing Cards in Alice's Adventures in Wonderland, The Royal Ballet