Your Reaction: What did you think of Mozart's Così fan tutte? 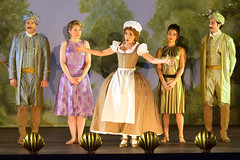 A round-up of reviews and reactions to Jan Philipp Gloger's new production of Mozart and Da Ponte’s opera on the nature of love.

Corinne Winters as Fiordiligi in rehearsal for Così fan tutte, The Royal Opera

Corinne Winters as Fiordiligi in rehearsal for Così fan tutte, The Royal Opera