English composer and conductor Constant Lambert (1905–51) was Founder Music Director of The Royal Ballet, and with Ninette de Valois and Frederick Ashton one of the key figures in guiding the initial artistic direction of the Company. He conducted both the first ballet (The Sleeping Beauty) and the first opera (The Fairy Queen, in his arrangement) that reopened the Royal Opera House in 1946.

Lambert was born in London and in 1922 won a scholarship to the Royal College of Music, where he composed his first ballets. In 1925 he was invited by Sergey Diaghilev to work with the Ballets Russes, his compositions for the company including Romeo and Juliet (1926). In 1931 De Valois engaged Lambert as Conductor and Music Director of the Vic-Wells Ballet (later The Royal Ballet). In collaboration with his assistant Hilda Gaunt, Lambert’s work with the Company included musical supervision of De Valois’ productions of the classics, including Swan Lake, Giselle, Coppélia and The Sleeping Beauty, and composing new scores and arrangements, including for Les Rendezvous, Les Patineurs and Horoscope. Lambert resigned as Music Director in 1947 but soon after returned as Guest Conductor, later conducting The Royal Ballet’s 1949 New York debut. He conducted the premiere of his last ballet for the Company, Tiresias, just six weeks before his death.

Lambert was a leading figure in British pre-war musical life, and in addition to his work with The Royal Ballet was a regular conductor at the Proms, with the Hallé and in opera at both Sadler’s Wells and the Royal Opera House.

Masterful or muddled? The controversial opera and ballet hybrid that heralded the dawn of The Royal Opera 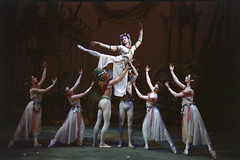 How an unlikely all-singing, all-dancing Purcell performance paved the way for the creation of The Royal Opera, 70 years ago.