Christopher Hampson has been Artistic Director of Scottish Ballet since 2012.

Hampson trained at The Royal Ballet School and went on to dance with English National Ballet until 1999. He has created numerous award-winning works on the company, including Double Concerto, Perpetuum Mobile, Country Garden, Concerto Grosso and The Nutcracker. His creations for other companies include Romeo and Juliet (nominated for a 2005 Olivier Award), Cinderella (named Best New Production by New Zealand Herald and televised by TVNZ in 2009) and Silhouette for Royal New Zealand Ballet, Giselle for National Theatre in Prague, Sinfonietta Giocosa and The Rite of Spring for Atlanta Ballet, Dear Norman for The Royal Ballet, Sextet and Storyville (nominated for a 2012 National Dance Award) for Ballet Black/ROH2 and Hansel and Gretel for Scottish Ballet.

Hampson is a co-founder of the International Ballet Masterclasses in Prague and has been a guest teacher for ENB, Royal Swedish Ballet, RNZB, Hong Kong Ballet, Atlanta Ballet, Bonachela Dance Company, Matthew Bourne’s New Adventures and the Genée International Ballet Competition. His work forms part of the Royal Academy of Dance’s Solo Seal Award. Hampson has spoken for TEDx Glasgow and in 2016 developed the inaugural Young Rural Retreat for Aspiring Leaders in association with Dance East.

Storyville: A new ballet from Christopher Hampson and Ballet Black 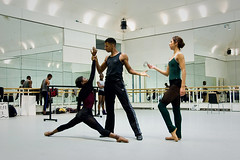 A look in at rehearsals for a tale of love and corruption set in New Orleans.