How to Stage an Opera: Freud and Die Frau ohne Schatten 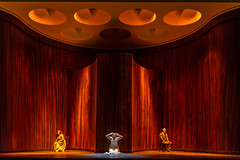 How changing attitudes to Freud have shaped the set designs of The Royal Opera's production.