French set designer Christian Fenouillat made his Royal Opera debut in 2000 creating set designs for La Cenerentola, directed by Moshe Leiser and Patrice Caurier. He has has since returned to work on Madama Butterfly, Hamlet, Il turco in Italia, Il barbiere di Siviglia, Hansel and Gretel and Maria Stuarda, all directed by Leiser and Caurier.

In theatre, Fenouillat’s credits include plays by Lorca, Pirandello, Strindberg, Bond, Synge and the Prix Goncourt-winning Marie N’Diaye. In cinema he has worked with directors including Jean-Luc Godard and Marguerite Duras. He also participates in art exhibitions, including in a co-exhibition with Juliette Binoche. 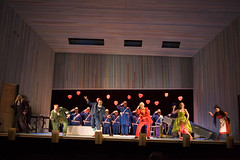