French set designer Chantal Thomas made her Royal Opera debut in 2007 on La Fille du régiment, directed by Laurent Pelly. She has since returned to create set designs for L’elisir d’amore, Manon and Robert le diable, all directed by Pelly. 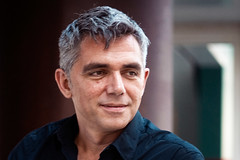 The director discusses the inspiration behind his production and the power of Donizetti’s music.