Bracher grew up in Johannesburg and came to dance at a very early age through her mother, a contemporary dancer and choreographer. She trained privately with Martin Schonberg at Ballet Theatre Afrikan and aged 15 won the Outstanding Contemporary Dancer Award at the 2007 Youth America Grand Prix in New York. That year she also won the Junior Contemporary Division at the South African International Ballet Competition in Cape Town. In her final year at school she was awarded the second prize in the Junior Girls Division at the 2009 Helsinki International Ballet Competition.

Bracher’s repertory with The Royal Ballet included White Cat (The Sleeping Beauty), Entertainer (The Invitation) and roles in The Nutcracker, Onegin, Swan Lake, The Rite of Spring, Infra, Giselle and Scènes de Ballet. She created roles in Carbon Life, ‘Diana and Actaeon’ (Metamorphosis: Titian 2012) and Woolf Works. In summer 2012 she created a role in Hot House, part of One Big Stage with Gareth Malone and the Royal Opera House Learning and Participation Department. 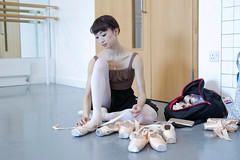 When it comes to creating and customizing pointe shoes for performance, every millimetre counts.

Camille Bracher and artists of The Royal Ballet in rehearsal for La Bayadère, World Ballet Day 2018

Camille Bracher and artists of The Royal Ballet in rehearsal for La Bayadère, World Ballet Day 2018

Yasmine Nagdhi and Matthew Ball in The Sleeping Beauty, The Royal Ballet

Camille Bracher as an Entertainer in The Invitation, The Royal Ballet