British composer Brian Elias made his Royal Ballet debut in 1992 on Kenneth MacMillan’s ballet The Judas Tree, collaborating closely with MacMillan on the ballet’s scenario. Elias’s score has entered the concert repertory. In 1993 he returned to The Royal Ballet to provide the score for Matthew Hart’s ballet Fanfare.

Elias was born in Bombay and began composing at a young age. He studied at the Royal College of Music with Humphrey Searle and Bernard Stevens, and privately with Elisabeth Lutyens. Works as a student include the cantata La Chevelure. Other early works include the a capella choral work Proverbs of Hell, Somnia for tenor and orchestra and the song cycle At the Edge of Time. His orchestral work L’Eylah received a warm critical reception at its BBC Proms premiere in 1984 and was followed by the chamber work Genaros, Variations for solo piano, Pythikos Nomos for alto saxophone and piano and the orchestral song cycle Five Songs to Poems by Irina Ratushinskaya, commissioned by the BBC. Later works include Three Songs for alto and harp, Birds Practise Songs in Dreams for solo clarinet, The House that Jack Built for bass-baritone and orchestra and the orchestral work A Talisman. His String Quartet, written for the Jerusalem String Quartet, received its premiere at Wake Forest University in 2013.

Elias’s awards include two British Composer Awards for Doubles (2010) and Electra Mourns (2013). Many of his works have been released on NMC. 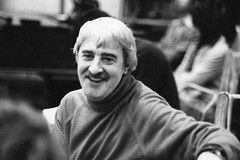