Barry Wordsworth is Principal Guest Conductor of The Royal Ballet. He has a long relationship with The Royal Ballet, having first been appointed as Assistant Conductor to the Company’s touring orchestra in 1972. The following year he became Principal Conductor of the Sadler’s Wells Royal Ballet and served as Music Director of The Royal Ballet from 1990 to 1995 and from 2006 to 2015, after an interim period with Birmingham Royal Ballet. He is Music Director Laureate of BRB and Conductor Laureate of the BBC Concert Orchestra and the Brighton Philharmonic. He has appeared as a guest conductor with companies around the world, including Tokyo Ballet, Leipzig Ballet and Paris Opera Ballet. He was appointed to his current position at the start of the 2015/16 Season.

Wordsworth was born in Surrey. His first experience of conducting was a performance of Handel’s Messiah at school. He won a scholarship to study at Trinity College of Music aged 13, followed by a scholarship to the Royal College of Music, where he studied with Adrian Boult. In addition to his work in ballet, Wordsworth has a distinguished parallel career as a symphonic conductor. He regularly conducts such orchestras as the Philharmonia Orchestra, London Symphony Orchestra, Royal Philharmonic Orchestra, the Ulster Orchestra, the Royal Concertgebouw Orchestra, Toronto Symphony, Sydney Symphony, New Zealand Symphony, Rotterdam Philharmonic and the Seoul Philharmonic. He has made many appearances at the BBC Proms, including at the Last Night of the Proms.

Wordsworth’s extensive discography includes discs of Tchaikovsky and Elgar with the Royal Philharmonic Orchestra and Grammy Award-winning recordings with Bryn Terfel and the London Symphony Orchestra for Deutsche Grammophon. He holds honorary doctorates from the University of Brighton and the University of Central England in Birmingham, and is an Honorary Fellow of Trinity College of Music in London.

Watch: Song of the Earth discussed - 'The unique quality of the choreography and wonderful score make it a masterpiece' 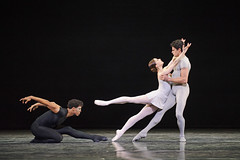 Going Underground: A day in the life of the orchestra pit 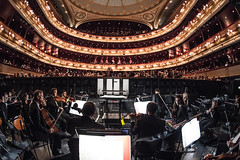 How do beautiful performances emerge from such dark, cramped conditions?