Hungarian bass Bálint Szabó made his Royal Opera debut in 2009 as the Prefect (Linda di Chamounix in concert) and has since returned to sing Prince de Bouillon (Adriana Lecouvreur). In the 2017/18 Season he returns to sing Oroe (Semiramide).

In 2004, Szabó was made a Knight of the Order of Merit by the Romanian Government for his services to the arts. 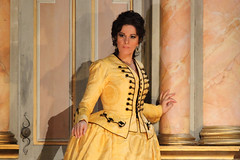