Devin studied at the Royal Irish Academy of Music, the Guildhall School of Music and Drama and the National Opera Studio. Engagements include Susanna (Le nozze di Figaro) for Glyndebourne on Tour, Susanna (Le nozze di Figaro), Sophie (Werther) and Zerlina (Don Giovanni) for Scottish Opera, Gretel for Garsington Opera, Clotilde (Faramondo) for the Göttingen International Handel Festival and Adele (Le Comte Ory) for Blackheath Community Opera. Her other roles include Semele and Morgana (Alcina) in concert, the Governess (The Turn of the Screw) as part of the Britten-Pears Young Artists Programme and Belinda (Dido and Aeneas).

Devin appears regularly in concert, recital and on recording. Engagements include Oberto (Alcina with English Concert on tour through Europe and at the Carnegie Hall.

Soprano Anna Devin - ‘Opera is all about communication and expressing yourself on stage. It’s up to you how you get there’ 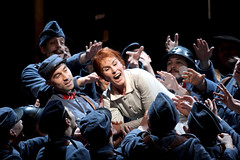 Former Jette Parker Young Artist on how opera has helped her tackle dyslexia, and returning to Covent Garden to perform Falstaff. 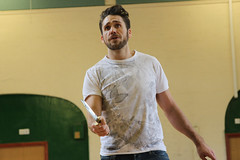 A glimpse into rehearsals for Rodula Gaitanou's production ahead of its staging at Hobart Baroque Festival in Tasmania.

Changhan Lim and Anna Devin in rehearsals for L’isola disabitata

Anna Devin as Wood Nymph in Rusalka, The Royal Opera