Latvian conductor Andris Nelsons made his Royal Opera debut in December 2009 with La bohème, and has since returned to conduct Madama Butterfly, Salome, Elektra, Der fliegende Holländer and Der Rosenkavalier, and in the 2017/18 Season conducts Lohengrin. He is Music Director of Boston Symphony Orchestra and Gewandhauskapellmeister elect of the Gewandhausorchester Leipzig.

Nelsons was born in Riga and began his career as a trumpeter with Latvian National Opera before studying conducting. He is Music Director of the Boston Symphony Orchestra and from February 2018 becomes Gewandhauskapellmeister of the Gewandhausorchester Leipzig. He was Music Director of the City of Birmingham Symphony Orchestra 2008–15, Principal Conductor of Nordwestdeutsche Philharmonie, Herford, 2006–9 and Music Director of Latvian National Opera 2003–7. In the 2017/18 season Nelsons is Artist in Residence with Konzerthaus Dortmund, and his engagements this season have included a tour of China with the Vienna Philharmonic, a Japan tour with the BSO and his first European tour with the Gewandhausorchester. He also works regularly with the Royal Concertgebouw Orchestra, the Berlin Philharmonic, the Bavarian Radio SO and the Philharmonia Orchestra.

Nelsons is an exclusive recording artist with Deutsche Grammophon, with which his projects include a Grammy Award-winning set of the complete Shostakovich symphonies and Lady Macbeth of Mtsensk with Boston Symphony Orchestra, Bruckner symphonies with the Gewandhausorchester and Beethoven symphonies with the Vienna Philharmonic Orchestra.

The Opera Machine and Antonio Pappano honoured at RPS Awards 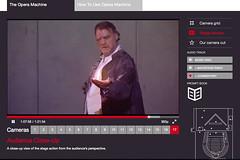 The Opera Machine — an extraordinary 17-camera view of the theatrical process — wins in the Creative Communication category. 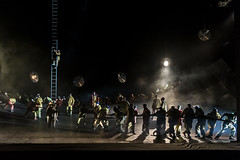 Acclaimed bass-baritone Bryn Terfel on the complexities of The Dutchman and working with Andris Nelsons.

Andris Nelsons in rehearsal for Lohengrin, The Royal Opera

Andris Nelsons and Klaus Florian Vogt in rehearsal for Lohengrin, The Royal Opera