Romanian director Andrei Serban made his Royal Opera debut in 1984 on Turandot and has since returned to The Royal Opera to direct Fidelio (1986), Prince Igor (1990, The Royal Opera’s first production of the work) and I puritani (1992).

Serban began his training at the Bucharest Theatre Institute and aged 21 started working with Julius Cezar. A Ford Foundation Grant took him to New York where he became one of the leading young directors in experimental theatre. He then returned to Europe to work with Peter Brook in Paris at his International Centre. Serban has a broad international career working in both theatre and opera. He has directed for the world’s leading opera companies, including Welsh National Opera, Paris Opéra, La Fenice, Venice, and in Vienna, San Francisco, Chicago, Amsterdam and Geneva, and has collaborated with such singers and conductors as Roberto Alagna, June Anderson, Natalie Dessay, Plácido Domingo, Renée Fleming, Gwyneth Jones, Jonas Kauffman, Alfredo Krauss, René Pape and Violeta Urmana and Riccardo Chailly, William Christie, Colin Davis, John Eliot Gardiner and Bernard Haitink.

Serban’s many awards include the Elliot Norton Award for Sustained Excellence, the George Abbott Award, a Tony and several Obies. He currently teaches acting at Columbia University, New York. 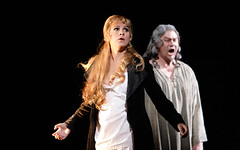