Foniadakis was born and grew up in Ierapetra, Crete. He studied at the National School of Dance in Athens and won a Maria Callas Scholarship to study at the Rudra Béjart School, Lausanne. He graduated in 1994 and went on to dance in many pieces by Béjart, and also choreographed several works for Béjart Ballet. He subsequently danced for the Ballet de l’Opéra de Lyon, directed by Yorgos Loukos, and Saburo Teshigawara’s KARAS Company. As a member of Ballet de l’Opéra de Lyon he danced in works by Nacho Duato, Mats Ek, William Forsythe, Bill T. Jones, Jiří Kylián, Maguy Marin and Ohad Naharin. 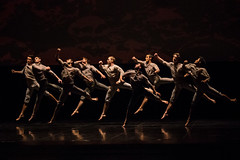 Our quick introduction to this mixed programme of contemporary dance from New Zealand’s national ballet company.