Choreographer Aletta Collins made her Royal Opera debut in 2004, creating the choreography for the world premiere of The Tempest. She has since worked as movement direction for the world premiere of Anna Nicole. In the Linbury Studio Theatre Collins has choreographed and directed Magical Night, The Red Balloon and Cocteau Voices. She was an Associate Artist at the Royal Opera House 2010–11.

Collins grew up in London and studied at the London Contemporary Dance School. She was a dancer and choreographer for London Contemporary Dance Theatre before beginning her freelance career. Collins’s extensive dance choreography includes The days run away like wild horses, Bloom and Awakenings for Rambert, Les Noces for Berlin Philharmonic and Maybe Yes Maybe, Maybe No Maybe; Gang of Five (Phoenix Dance Company/UK Tour).

Collins’s credits as a director and choreographer include Carmen (Salzburg Festival); If You Kiss Me, Kiss Me (Young Vic) and La fanciulla del West, La Voix humaine, Dido and Aeneas and Les Noces (Opera North). Recent theatre and opera choreography includes The Twilight Zone (Almeida), The Hairy Ape (Old Vic/Park Avenue Armory, New York), Sweet Charity (Royal Exchange, Manchester), La traviata (Glyndebourne Festival and on Tour), and The Wind in the Willows – The Musical, Bend It Like Beckham and Made In Dagenham (West End). 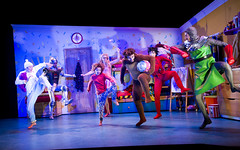 A colourful new adventure for Christmas from ROH2.