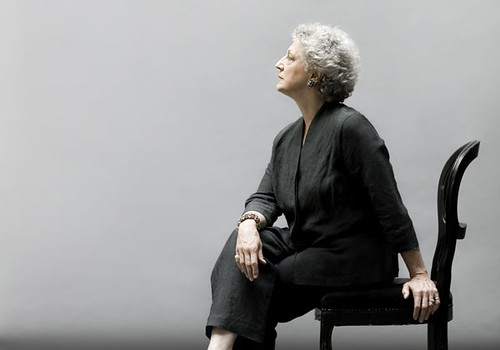 Monica Mason was born in Johannesburg, South Africa. She came to England at the age of 14, training at the Nesta Brooking School of Ballet and The Royal Ballet School. She joined The Royal Ballet in 1958 when she was only 16, the youngest member of the Company at that time. After a brief period in the corps de ballet, she was selected by Kenneth MacMillan to create the demanding role of the Chosen Maiden in The Rite of Spring, first performed in 1962. One year later, in 1963, she was appointed Soloist.

She became a Principal in 1968. Technically a strong dancer, she was particularly noted for the warmth of her personality and her dramatic sense. Her range embraced purely classical roles such as Odette/Odile in Swan Lake, Princess Aurora in The Sleeping Beauty, the title role and Myrthe in Giselle, the Prelude and Mazurka in Les Sylphides and the leading role in Raymonda Act III as well as dramatic parts such as the Hostess in Les Biches and the Black Queen in Checkmate. In 1974 MacMillan created four roles for her: Lescaut’s Mistress in Manon, Calliope Rag in Elite Syncopations, Summer in The Four Seasons and the Midwife in Rituals. A highly praised interpreter of the leading roles in MacMillan’s Song of the Earth and Nureyev’s Kingdom of the Shades’ scene from La Bayadere, she was in the first performances by The Royal Ballet of Hans van Manen’s Adagio Hammerklavier, Jerome Robbins’s Dances at a Gathering and In the Night, George Balanchine’s Liebeslieder Walzer and Antony Tudor’s Dark Elegies. Other major roles have included the Lilac Fairy in The Sleeping Beauty; Empress Elisabeth and Mitzi Caspar in MacMillan’s Mayerling; the title role in The Firebird; for Frederick Ashton, Variation I in Birthday Offering, the Fairy Godmother and Winter Fairy in Cinderella and Lady Elgar in Enigma Variations; and the Queen of Denmark in Robert Helpmann’s Hamlet.  She created a leading role in David Bintley’s Adieu in 1980, Nursey in MacMillan’s Isadora in 1981 and Mrs Grose in William Tuckett’s Turn of the Screw in 1999. In 1980 Mason was appointed Repetiteur to Kenneth MacMillan, then in 1984 Principal Repetiteur to The Royal Ballet. In January 1991, after four years of assisting Anthony Dowell, she became Assistant Director; in September 2002 she was appointed Acting Director following the resignation of Ross Stretton, and Director in December 2002. She was awarded an Honorary Doctorate by the University of Surrey in July 1996 and an OBE in 2002. In June 2008, she was created a Dame Commander for her services to dance.

In summer 2012 Monica retired as Director of The Royal Ballet and was succeeded by Kevin O'Hare.